One of the many fascinations of the online Oxford English Dictionary is the list of most frequent contributors – those whose writing has provided the compilers with the first evidence of words, first evidence of a particular meaning, and total number of quotations.* We all know that Shakespeare coined a huge number of words (1582, according to OED), and it stands to reason that the Bible, the Philosophical Transactions and the Times also appear near the top of the list. But what of our favorite Restoration natural philosopher, Robert Hooke? He appears at number 802 in the list of the top 1000 most frequently quoted sources, with most of these citations coming from Micrographia. His writings provide the first evidence for 68 words, and the first evidence of particular meanings for 240 words. So, have you used one of Hooke’s words today? The full list is below.

But of course it’s not quite as straightforward as that – just because Hooke provides the first evidence of a word doesn’t mean that he coined it. I doubt he invented the ‘door-matt’, for example (neither the word nor the item itself). Nor, sadly, did he invent ‘penumbra’ for ‘partially shaded area’ – apparently the astronomer Johannes Kepler used this in a Latin treatise in 1604, but Hooke seems to have been the first to transfer it into English. Hooke was very fond of the useful word ‘globule’ (round drop of liquid, or small round particle), but so were many of his fellow experimental philosophers. Given that Robert Lovell also used ‘globule’ in print in 1661, the same year that Hooke is cited with the first usage, it seems likely to have been in circulation before that. (Hooke is also credited with the first usage of ‘spherule’ for ‘a little sphere’ – obviously there were a lot of little round things needing to be discussed.) Hooke may have invented ‘biocular’ (having two eyes), but his fellow microscopist Henry Power had already used ‘monocular’ so again this may not count.

Did Hooke invent any words then? Possibly. ‘Hexangular’ (having six angles) might be a contender; ‘interstitiated’ (situated in interstices); ‘triagonal’ (triangular; the OED rather snootily calls this an ‘erroneous formation for TRIGONAL’); ‘quintuplicate’ (to multiply by five); ‘spiralled’ (shaped spirally). Though undoubtedly useful in their way, not many of these caught on: Hooke’s is the solitary example of ‘interstitiated’. Some more recognisable words have been quoted from Hooke’s diary, including ‘punk’ (soft decayed or rotten wood), ‘menagerie’, and ‘mischief-maker’. Again, I suspect it was merely chance that Hooke’s is the first observable usage of these words.

Actually I think it’s quite interesting that Hooke was not more linguistically inventive. After all, in Micrographia he was describing things that no-one had ever seen before – surely this would have been a perfect opportunity to make up some new words? Several of his Royal Society colleagues were active neologists, particularly Robert Boyle (first evidence for 360 words), John Evelyn (491 words) and John Ray (342 words)** – all outdone by the Norfolk physician Sir Thomas Browne, who coined or provided first evidence for an impressive 779 words.

I think that in Micrographia at least, Hooke made a fairly deliberate attempt not to use neologisms. He was writing for a general reader, not necessarily one who knew anything about the experimental philosophy. His subject-matter was already outside the experience of most of his readers – to describe it using the complex Latinate constructions favored by, for example, Sir Thomas Browne would have distanced it even further. Instead, Hooke tried to do the opposite. He used straightforward descriptions and similes from everyday life (hence his reference to a door-mat) in an attempt to communicate his observations clearly and vividly. Of course the most famous example of this is his use of the word ‘cell’ for the tiny structures he observed in a slice of cork.

Having said that, my favorite Hooke coinage does come from Micrographia: ‘splatch’, meaning splash or splotch. Hooke likened the chaotic outline of a printed full-stop, seen under his microscope, to ‘a great splatch of London dirt’ – something with which he and his readers were presumably very familiar indeed. 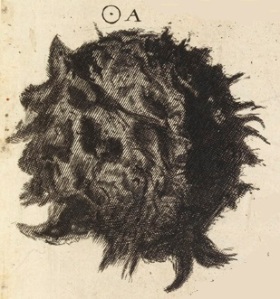 Printed full-stop, original size (marked ‘A’), and viewed under microscope. © The Royal Society

The 68 words coined or first used in print by Hooke:

* For those of you who aren’t familiar with the full OED, as well as providing definitions, entries show quotations with the first usage of each word and a selection of later usages, so you can see the word in context through the centuries – an absolutely fantastic resource for scholars, and a source of endless fascination for those of us who love the English language!

** In case any OED staff are reading this, I’d like to point out that Hooke’s friend Francis Lodwick FRS used the word ‘firewall’ in a manuscript treatise of recommendations for rebuilding London after the Great Fire in around 1666 – over 100 years before the first citation listed in OED.

Update (31 March) – I’m very excited to say that an OED editor has just contacted me about this, so it’s possible that Lodwick is about to get an entry in the OED. Hurrah! Here’s the full quote, in case anyone’s interested:

‘It would be for more security, that between every two of those warehouses there be brick walls rising, as before was mentiond between each house, that each having his own wall, there may one wall be raised between them, to rise streight up as high as the ridge of the tiling, which for distinction may be called the Firewall, that in case of accident the fire come into any of the storehouses, its further progres may be stopped.’

from ‘Mr Lodowicks proposal for the rebuilding of the Citty’ in Francis Lodwick, On Language, Theology, and Utopia ed. Felicity Henderson and William Poole (OUP, 2011)

8 thoughts on “Door-mats and penumbras: Hooke’s contributions to the English Language”