I expect all historians can think of one or two moments in history they would really like to have seen for themselves (often, it must be said, from a safe distance). As a great fan of the early Royal Society, I’ve often wondered what it would have been like to attend one of the Society’s weekly meetings in the 17th century. Judging from the minutes of the meetings, the conversation could range over almost any topic imaginable, and there was always the possibility of a monster of some kind being brought in to liven up the proceedings. This is all by way of introduction to a passage in the minutes recording a conversation that took place on 28 November 1678 about how to render a coal-mine safe to enter (and like so many aspects of Restoration life, I don’t advise trying this at home).

The conversation had turned to ‘subterraneous steams and fiery damps’ – that is, the gaseous exhalations that could, in some parts of the world, be set on fire and used to fry or roast meat (apparently this happened at Dauphiny in France). These gases could of course be extremely explosive, and Sir Jonas More recounted the events following an accidental ‘firing’ at a coal mine in Lumley:

. . . it shook the earth for a considerable way round about, and carried some miners, who were going down into it, a very great hight into the air, and blew up also aloft into the air all the building, that stood over and about the mouth of the mine.

History does not record whether the poor miners survived being blown a very great height into the air – but Sir Paul Neile followed this up by relating the ‘cure’ for this problem, which was ‘found out accidentally’ by miners working for Sir William Lampton.

“The miners having been above making merry, and being almost fuddled, began to throw firy coals at one another, some of which falling accidentally into the mouth of the coal-mine, set fire to the damp, and made it discharge with a very great noise, and shaking of the earth. Upon taking notice of this, and the cause of it, they after a little space of time tried by designedly throwing down burning coals into the mouth of the mine; and presently falling down flat on their bellies on the ground observed, that the mine again took fire, and blew up into the air with a great noise. This they repeated several times one after another, till they found, that it would fire no more: after which they ventured down into the mine without any succeeding injury from the said mine for the remaining part of the day. But for fear lest they should be farther incommoded by the said firy damps, they always in the morning, before they go down, endeavour to fire the said damps, by throwing down lighted coals till the pit will fire no more.”

What, you may ask, does this have to do with Hooke? Well, he was present at this conversation although for once he seems not to have proffered an opinion. But more importantly, his and Robert Boyle’s experiments with the vacuum or air-pump contributed to the understanding of air, and the conditions necessary for combustion.

I’ll finish with one of the lovely woodcuts from Georg Agricola’s early mining manual ‘De Re Metallica’ (1556), which shows a design for a shaft ventilation system directing wind down into the mine. 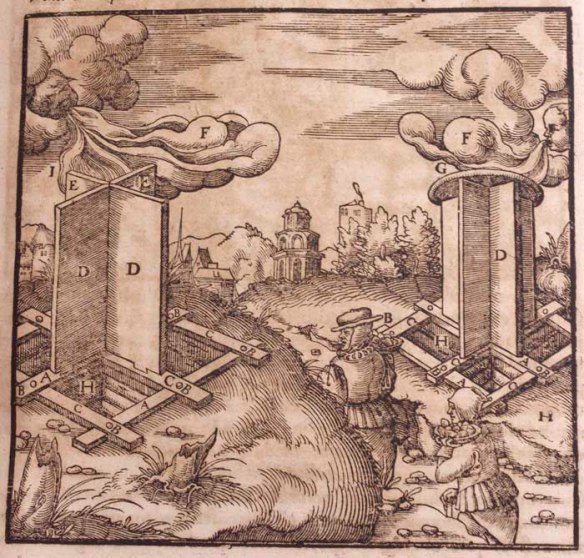