I know that many scientists are fascinated by Micrographia, but to me it has always seemed like a book with a much broader appeal. Hooke’s simple but evocative language, and his beautiful, intricate illustrations, must have been deliberately chosen to appeal to an audience beyond the small group of experimental philosophers in Restoration London. For a long time I’ve wanted to find out how contemporary writers and artists might respond to Micrographia, and whether they would find anything there to inspire their creative practice. Now, I’ve finally had the opportunity to do this – and it seems as though the answer is yes they do!

Thanks to the University of Exeter’s Catalyst seed fund and the Exeter Cathedral Library, I was able to run two half-day workshops bringing artists and creative writers together to see an original copy of Micrographia, do some microscopy, and reflect on these experiences in their art or writing. I was really lucky to be able to recruit some fantastic collaborators to help present the workshops: the artist Amy Shelton and poet Matthew Francis, my colleagues Katie Solomon and Mark Ramsdale from the School of Biosciences at the University of Exeter, and very importantly, Ann Barwood and Stuart MacWilliam from the Exeter Cathedral Library. Ann and Stuart allowed us to have Micrographia in the room with us all day, giving people plenty of time to read the text and look at the amazing illustrations up close. 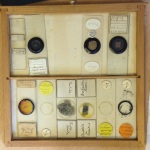 Katie and Mark provided a range of microscopes, including a Victorian child’s toy microscope similar to the instrument that Hooke originally used. They also brought along a collection of prepared slides, probably late Victorian – these were beautiful objects in themselves, but seen through the microscopes they really demonstrated the amazing variety and intricacy of natural structures.

Most of the workshop participants had little previous experience of microscopy (some of the women explained that although their brothers had had microscopes as children they had not been allowed to touch them!). I think everyone felt something of Hooke’s sense of excitement in seeing things for the first time – a dragon-fly’s wing, an ant, fish scales.

In the morning Matthew Francis led the writers in a couple of exercises, the first using syllabic verse, the second responding to a section of Hooke’s text. This Micrographia extract (on the ‘small, Silver-colour’d Book-worm’, or silver-fish), when re-lineated and truncated, appeared to be a poem in its own right, such is the richness of Hooke’s language and imagery. I was interested to see the range of responses from the writers, some choosing to focus on the things they had observed through microscopes, others reflecting on the act of seeing, or the contrast between human and microscopic scale. (Poet Alwyn Marriage has blogged about her experience here.) 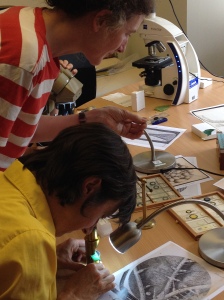 In the afternoon, Amy Shelton gave the artists free rein and there were some beautiful sketches developed as well as wide-ranging conversation about Hooke, Micrographia and the microscopic specimens. I think all the participants, artists and writers, could happily have spent twice as long looking at the slides and thinking about how to interpret or represent them.

I had some really great feedback after the event and it sounds as though quite a few people are keen to take the work they started on the day further. I’m looking forward to seeing it!